Pedro Cifuentes, known as Hombre Solo, writes about his last expedition to Patagonia.

Patagonia is a magical place. We asked Pedro Cifuentes, a lone mountaineer also known as the Hombre Solo, to tell us about his recent experience.

"Patagonia is an intense place...!

Intense because of its extreme and capricious weather. Intense due to its disproportionate dimensions, both vertical and horizontal, and also intense for the experiences that are lived in that environment. Therefore, when returning from an expedition without achieving the intended goal, I am not entirely clear if it is a failure, or not.  But let's tell the story from the beginning ...

On a first attempt more than 10 years ago as soon as we looked at the Marconi Pass and saw the immensity of the Southern Patagonian Ice Field, with no idea where we were going, I realized that the mission was too big for us. However, it also became clear to me that I wanted to navigate that deep, frozen sea and that I wanted to see the Pacific Ocean from the highest peak in the area: the Lautaro volcano. 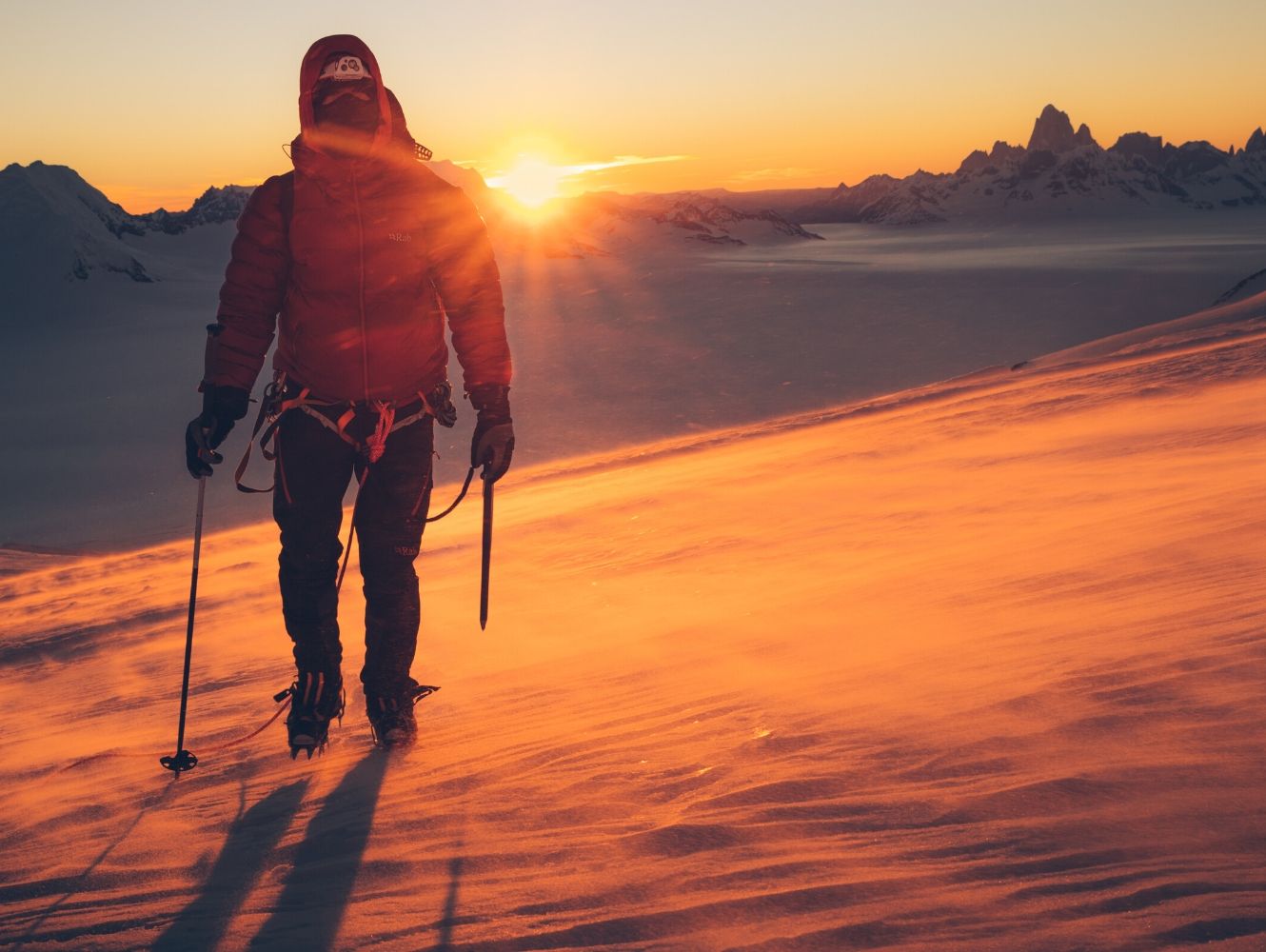 A few years later, with a better idea about where I was going, and with a local partner who had extensive experience in the area, it was the bad weather (as ever) that didn’t allow us to approach the peak. But at least I was able to complete the classic traverse Paso Marconi - Paso del Viento, which was a great experience for future attempts.

So here I am again, back in El Chaltén in mid-October. This time with my friend the photographer José Allende, in his first mountain outing outside his native Picos de Europa, in search of the photograph of his dreams: a night photo of the west face of Cerro Torre. With him is Pedro Cifuentes, a well-known solo climber, who is not difficult to convince to travel to his beloved Patagonia, but for him this visit’s intended to be something a bit different.

Lautaro volcano (3623 m) is a seldom-visited mountain despite being the highest point of the Southern Patagonian Ice Field and it’s also one for which there is not much information. Also, its remoteness and position, to the NW of the Marconi Pass (the usual access point to the Southern Patagonian Ice Cap from the Argentine side), implies that it’s often necessary to fight against the prevailing winds in the area. So even more than normal in Patagonia, here the weather conditions are decisive and at least three good days are needed.

We are told when we arrive at El Chaltén that this is something that has hardly happened so far this year, it’s one of the worst years for a long time. The weather during the first two weeks in El Chaltén follows the tone of what has been the whole year: rain and wind, with a few hours of clear weather that only allow us to stretch our legs.  Everything changes suddenly when all the weather sites change their forecasts announcing nothing less than a week of stable weather, sunny and calm. We can hardly believe it and - just in case – we get in touch with our friend at the Spanish Meteorological Agency, who confirms our good omens. The next day we leave with equipment, food and gas for 12 days, (in case the forecast is wrong and the good weather lasts less than expected): in Patagonia good weather doesn’t normally last!  Each of our packs exceed 30 kg. We are not going exactly ‘alpine style’... 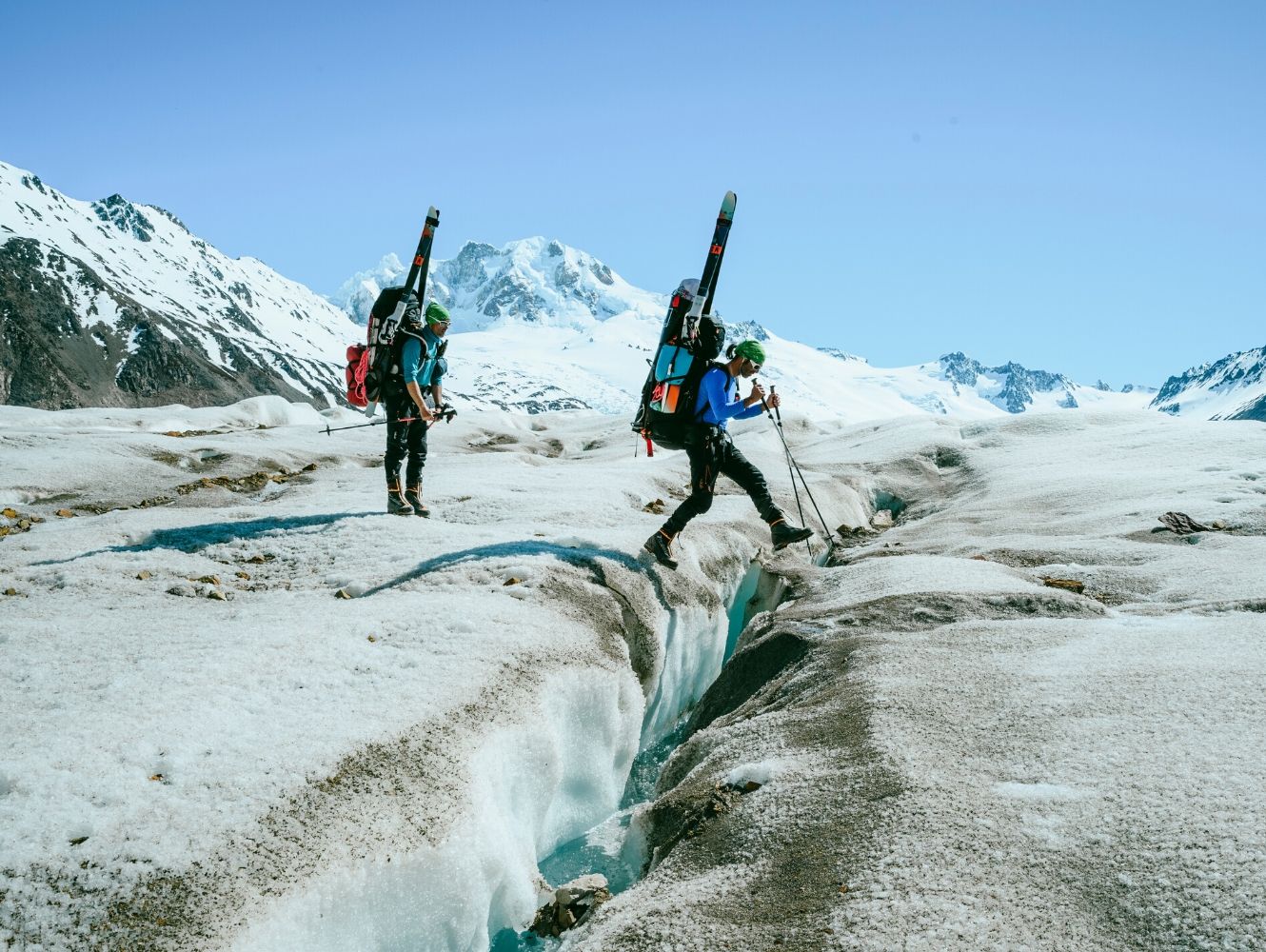 The first two days, when we have to gain something more than 1000m of altitude to access the ice field, go slowly due to the weight of the backpacks, until the slope of the glacier allows us to get the load to the sleds and get on our skis. With good weather, we are like children in Disneyland and Fitz Roy and Piergiorgio welcome us with an impressive reddish sunset on our first night in the Marconi Pass. From here, about 40 km separate us from the base of Lautaro; it’s a long and somewhat monotonous day and makes us realize the enormity of the task ahead.

On the way to the base, we meet Emma and Jesse, a couple of Canadians who have the same goal, but their idea is to ski the descent. We go with Nordic style skis but only for the approach, so while we share the same objective, we have different methods.  They opt to head up the peak the next morning, while we know that because our descent will take much longer than theirs, we wait a few more hours, hydrate well and recover strength, preparing for a long day.

After 11 hours of climbing and 4 hours of descent the Canadians arrive from the summit in the middle of the afternoon. They tell us about an important bergschrund halfway up the route which they crossed by a dubious snow bridge on the left-hand side of the slope on the way up, while on the descent they opted for the other end. Descending on skis they passed it quickly, but tell us it wasn’t much better. With these tips we leave shortly after dinner, about 11 PM. A full moon means good visibility during the first part of the night and little by little we climb on, avoiding the initial crevasses. Following the directions the Canadians gave us, we go to the right side of the slope, expecting to find the famous bergschrund. Then, just as the full moon goes behind the summit and the darkness is complete, the wind begins to get stronger sending snow showers from the upper slopes, reminding us forcefully that we aren’t in Disneyland.

At that point I see the dark crevasse about 20 meters wide and stretching across the slope in front of us. This is what our friends had told us about and it is worse than we anticipated. We consider crossing at the place they descended, but it would mean spending a lot of time under a menacing serac that shows the remains of recent avalanches at its feet. We stop to evaluate the situation. On skis the Canadians had passed this area quickly, but without them it seems too risky, so with heavy hearts we make the difficult decision to turn around. It is hard to make these decisions when you have  seen your dream almost within reach, but the roar of seracs falling with the first rays of sun brings us back to reality. We make the right decision.

Back to the camp, Emma and Jesse receive us with coffee and cookies and we share the last ‘alfajor’ of ‘La Chocolatería’ that we had saved for the summit. It’s a precise operation but we manage somehow to cut it into five pieces! The expedition is not over yet. We still have more than 80 km of ice field to get through the Paso del Viento. Two more days in the middle of one of the most spectacular mountain landscapes in the world, enjoying the simple joys of skiing, pulling the sled and enjoying the views of the west face of Cerro Torre. But all good things must come to an end and when we leave the glacier, we transfer the load from the sleds to our backs again and the accumulated fatigue is noticeable. Another two days, crossing the mythical Paso del Viento – yet without a wisp of wind - take us back to El Chaltén, where we arrive late in the evening. Everyone’s going out for dinner and enjoying the artisanal beer festival and we, broken from fatigue ‘close the loop’ of 145 km in seven days of activity, head straight to bed!

In summary: I still have not seen the Pacific from the summit of Lautaro, but I have enjoyed some of the best moments of my mountain life. José didn’t get the night shot he dreamed of because of the full moon, but got home with many other spectacular, award-winning images to add to his portfolio. And Pedro? He returned with batteries recharged and a new mission; to make the first solo traverse of the Fitzroy skyline, now more than ever convinced that he prefers to drag a haulbag up a wall, than carry it on his back...

So, success or failure? I am still not sure. But was it worth it? Of course!"